As any other orchid lover, the moment you see a baby orchid on the rod, it’s priceless. Better said, in Hawaiian, a keiki!

Well, wondering what can you do with a keiki? No more! You will transplant it in other pot and start taking proper care of it. But, before doing the keiki transplantation, you should keep in mind the following information: 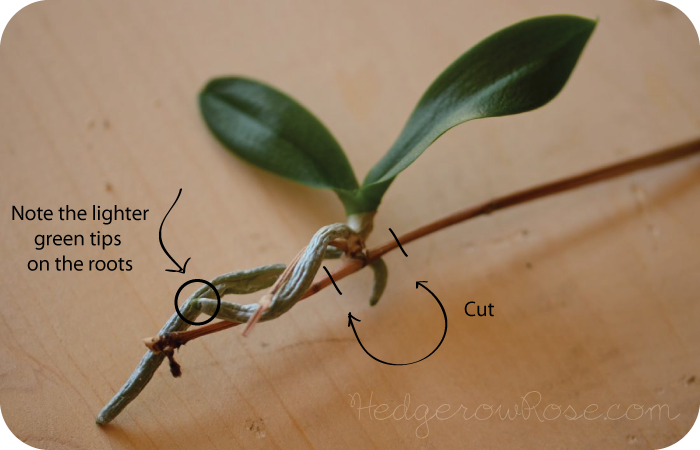 When you should transplant a keiki?

1. Typically, a keiki is transplanted when it has at least 3 leaves and 3-4 roots, of which 2 have exceeded 5cm in length.

3. As a rule, the transplantation signal is given by the withering and drying of the stem which links the keiki to parent orchid.

4. At that point, the new plant must be moved immediately into a new pot.

1. An even smarter way of transplanting is to place the new plant in a new pot after the first roots appear.
2. Proper transplantation consists in laying the roots of the new plant on the surface of the substrate, by fixing and keeping it stable.
3. Careful! As a rule, the roots of the new plant grow in the upper side because the leaves grow backwards due to their heaviness. To place the roots in the correct position, you will have to twist the stem, but with delicacy, because it’s brittle!
4. You don’t have to worry about putting the new plant perfectly vertically into the pot. Positioning it to a 30 ° angle is enough. Once accommodated, the plant will sit alone in a more comfortable position.
5. Watering is done the same way as you for the mature plant, probably more abundant until the roots fall down the bottom of the pot.
6. When there are 6-7 roots and the plant seems stabilized, the connection stem to the parent plant can be cut.
7. As a matter of fact, you can wait for the natural stem drying of the plant, a phenomenon that will clearly announce that the plant doesn’t need help anymore.

1. The young plant (keiki) is stabilized in a new pot sooner.
2. The risk of failure is lower than in the case of keiki detachment from the mother plant.
3. The method mimics orchid’s behavior in its natural environment.